The straw bale adventure began March 8 with repurposed cardboard on top of the area to be planted, then the bales positioned and watered in. The recommended program of applying high nitrogen fertilizer, watering in, alternating with days of only water continued for 2 weeks. By March 19 the bales were cooled to 50-55 degrees.

Here's a synopsis of the activity:

On March 22 -  Compost and soil were layered on top each bale and watered in. Four hills potatoes. a row of snap peas, a patch of onion sets were planted and watered in.

April 10 - Seeded nasturtiums and another bed of carrots.

May 4 - Sunflowers along house germinating, yellow tomato in bloom.

May 11 - Beans up with first true leaves.

May 16 - Seeded in pots for starts to set out later: borage, hyssop, morning glory, flax.

A potato hill withonions in the background: 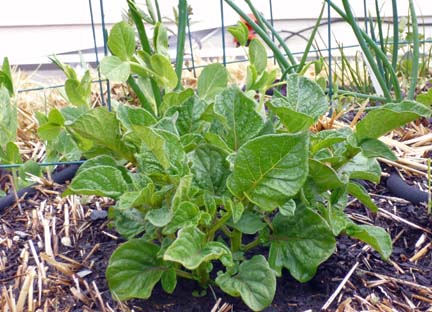 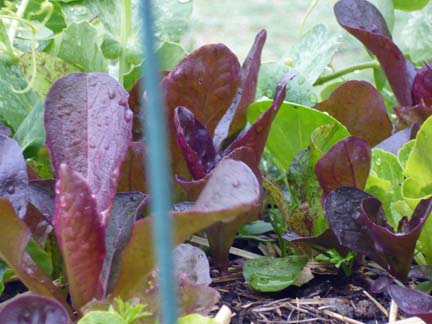 Meanwhile, beginning April 4, we began the planting of shrubs and trees in the area around the house and slightly below. Our first order of bare root stock was comprised of Lilacs, American Plum trees, Viburnum (cranberry bush), Serviceberry, Whitney Crab, Linden, Sumac and Silverberry.

2/3 of the way through we got smart and hired help with the digging. Wow, it got easier.

By April 17 everything was in the ground and we talked about Phase Two. This would be our living snow fence and a few more varieties of trees/shrubs. When we learned that our nursery does not do Fall delivery we went ahead and ordered the stock, after making sure our helper would be available. April 25 all the holes were dug. What a day!

April 30 saw the delivery of nursery stock. Potentilla went in around the deck on the North of the house. Four days later the rest of the stock arrived.

This order was yet more SIlverberry and Lilac as well as Mountain Ash, Red Twig Dogwood and Cotoneaster. Within two weeks everything was in and watered well.

We've been so lucky with the weather this Spring. It has been nice and cool with some moisture and no harsh temperatures.

All together we've put 191 trees and shrubs in. Our choices were made with these considerations, not necesarily in this order: drought tolerant, cold and wind hardiness, soil adaptability, native species if possible, bird and pollinator friendly and at least somewhat deer resistant. We also wanted year round visual interest and the beginning of a natural snow fence along the driveway.

At this point, May 19, everything is thriving. The Whitney Crab is flowering, almost everything else is beginning to leaf out. As for the deer, they've been nibbling but haven't been too serious about that. It's not too upsetting if one considers that young plants benefit from judicious pruning the first couple of years.

30 days until the next New moon